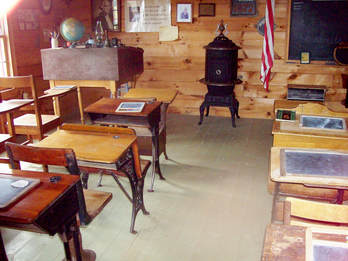 A frontier one room school house was constructed next to the main building in 1993. It has fixtures appropriate to the 1860s including a bell and tower.

This building is a replica of the Lyndon one room school house.

The register of 1871 revealed that the size of the school was to be 24' x 32' with 12' posts. The location of the school was determined to be on a spot just north of the burying ground (Lyndon Cemetery) that belonged to Winslow Hall.

The first summer school was taught on June 25, 1872. The schoolhouse was insured in April 1873 The building was used by other various organizations for meetings. April 17, 1875 the ceiling was sheeted with 1/2" pine, the doors were made on spruce or fur and on April 15, 1876 the walls were plastered with Rockland Plaster. A teacher's platform was constructed.

On April 20, 1878, the town of Caribou raised money for a free high school. April 7, 1883 the schoolhouse was painted for $18.  In 1884, students who broke glass replaced it and replaced the fence if they destroyed it. April 3, 1886, plaster holes were sheeted with paper. Later boarded and painted the wall for $40. 1891, locks and door latches were purchased for the doors.

The Lyndon School House, built in 1872, was located on land adjacent to the site now occupied by the Caribou Historical Society: A Whittier Memorial.